Samsung prepares to announce another entry-level smartphone after launching its folding flagships. we are talking about Galaxy A04 Core which passed through Geekbench this Thursday.

According to a sheet published by the benchmark platform, the smartphone is numbered SM-A042F and should be announced with MediaTek Helio G35 processor. The chipset works with 3 GB of RAM and native Android 12.

As a result, the roach scored 802 points in the single-core test and 3556 in the multi-core test.

For now, Samsung doesn’t give an official release date for the Galaxy A04 Core, but some leaked renders have already shown some design aspects of the device.

Galaxy A04 Core passes Geekbench with MediaTek chipset and Android 12

Thus, we know that it must come out of the box with an Infinity-V screen to accommodate the selfie camera, it must have a single rear camera and a USB-C port. 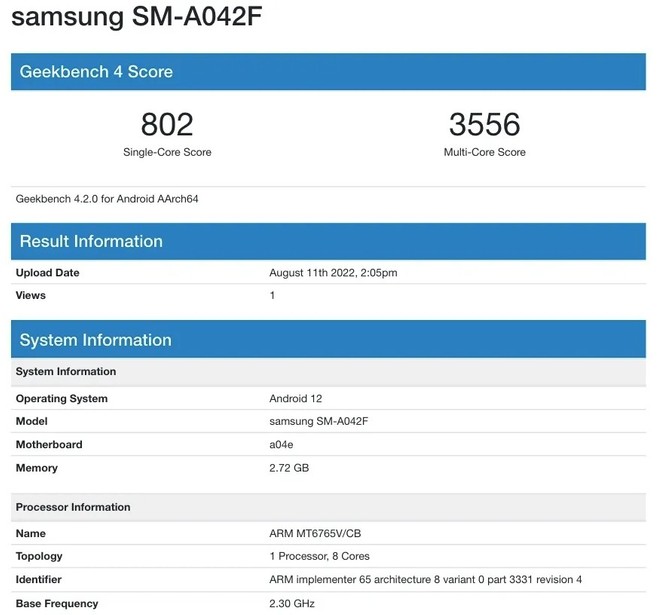 Galaxy A04 Core: renders leak after mobile appears in certifications

After appearing in some certifications, the WinFuture portal brought the complete visual details of Samsung’s new basic, the Galaxy A04 Core which will replace the A03 Core. The renders, according to the source, may not be entirely accurate, but they should be close enough, considering that this lineup has seen few visual changes in recent years.

On the rear panel, a notable detail is that the region of the camera module (which remains with only one sensor) maintains the smooth pattern of the rest of the rear, while on the A03 the region had a small striped detail that stood out from the paintwork.

Like the previous model, Samsung’s upcoming Galaxy A04 Core has a Infinity-V design for the screen notch that accommodates the selfie camera. Likewise, the phone has the same thick edges and the bottom edge even more so. The cell phone must be launched in at least three color options: black, copper and light green. The exterior colors differ from the A03 Core, but the wallpaper, at least in these renders, does not.

As per previous reports, the Galaxy A04 Core should feature the Exynos 850 chipset. It should also run Android 12, already on the One UI 4.1 interface, but with some streamlined features to accommodate the simpler specs.